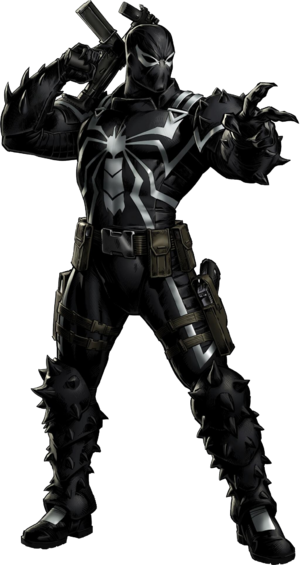 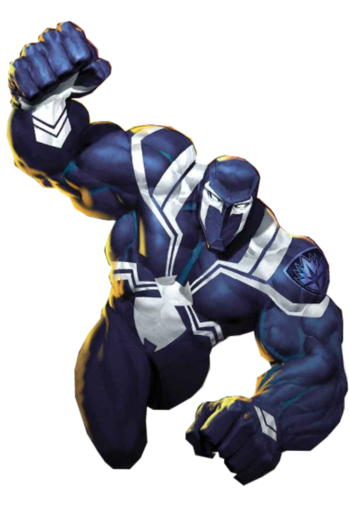 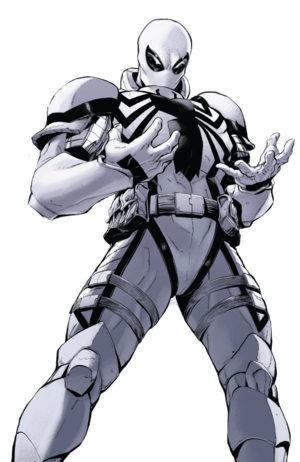 "Coaching the life and death struggle in terms straight out of the glory day playbook... It's all a bunch of smoke and mirrors... A cover up for the fear. Because when it comes to being a hero... When it comes to helping people... I'm terrified by what happens when I fail." ― Flash Thompson

Eugene “Flash” Thompson is Peter Parker’s former classmate, childhood bully, and Spider-Man’s biggest fan. Joining the military after graduating from high school, he lost his legs while saving a fellow soldier in Iraq. He is subsequently enlisted into Project Rebirth 2.0, where he bonds with the Venom symbiote that had formerly been bonded to Eddie Brock and Mac Gargan (better known as the Scorpion). Forming a close relationship with the symbiote, he utilizes its powers for good and has been part of the Secret Avengers, the Thunderbolts, and the Guardians of the Galaxy on separate occasions.

Classification: Human bonded with a Symbiote

Attack Potency: Large Building level+ (Stalemated both Spider-Man and Toxin on separate occasions, and is strong enough to send Anti-Venom flying with a punch)

Intelligence: Due to formal training as a boxer and a soldier, Flash is an exceptional combatant and easily combines his abilities with the use of symbiote powers.

Weaknesses: The Venom symbiote, like all others of its kind, is extremely vulnerable to heat and sonic based attacks. They can cause the symbiote physical pain and discomfort, where as "more powerful" attacks might be completely ineffective.

It has not been shown throughout the comics whether Agent Venom has Precognition (Through the spider sense). It is implied that Agent Venom did not have it, since his powers came from the Venom symbiote that had formerly been bonded to Eddie Brock and Mac Gargan, neither of whom possessed the ability.

Before making any changes to this page, please read and follow the Power-scaling Rules for Marvel and DC Comics.