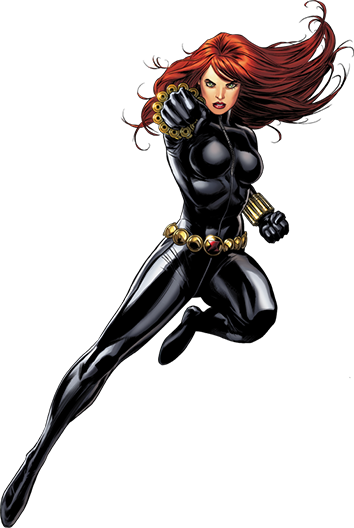 Former KGB agent Natasha Romanova, known as Black Widow, is one of the greatest spies ever and is one of the best agents S.H.I.E.L.D. has ever had. She's a long-time member of the Avengers and was a founding member and the only leader of the short-lived Los Angeles-based superteam: The Champions.

Lifting Strength: At least Class 1 (Capable of lifting up to 500 lbs. Comparable to Punisher who can snap necks while they are straight)

Standard Equipment: Her gauntlets that have wrist cartridges containing various tools of the spy trade: tear-gas pellets, a radio transmitter, and spring-loaded cable. Various automatic weapons and firearms, combat knives and explosives as needed. She also uses a device often referred to as the Widow's Bite that is capable of emitting highly potent electric shocks with a maximum of about 30,000 volts.

Intelligence: Extremely high (on par with Steve), being able to quickly process information and rapidly respond to changing tactical situations. Very effective strategist, tactician, and field commander. She has lead the Avengers and even S.H.I.E.L.D. on one occasion. Expert in the field of seduction, Natasha has been infamously known to bend many different men to her will and sometimes even get them to do her bidding for her. Talented hacker, an expert in the field of martial arts, extremely accurate marksman skilled in sharpshooting and knife throwing, she is fluent in Russian, English, French, German, Chinese, Japanese, and various other languages. She is a dangerous secret agent trained in espionage, stealth, disguise, infiltration, and demolitions. She displays an uncanny affinity for psychological manipulation and can mask her real emotions perfectly. She is capable of killing in cold blood when the need arises. Her talents and years of experience have enabled her to reach a high ranking as an agent of S.H.I.E.L.D.

Note: Before making any changes to this page, please read and follow the Power-scaling Rules for Marvel and DC Comics.